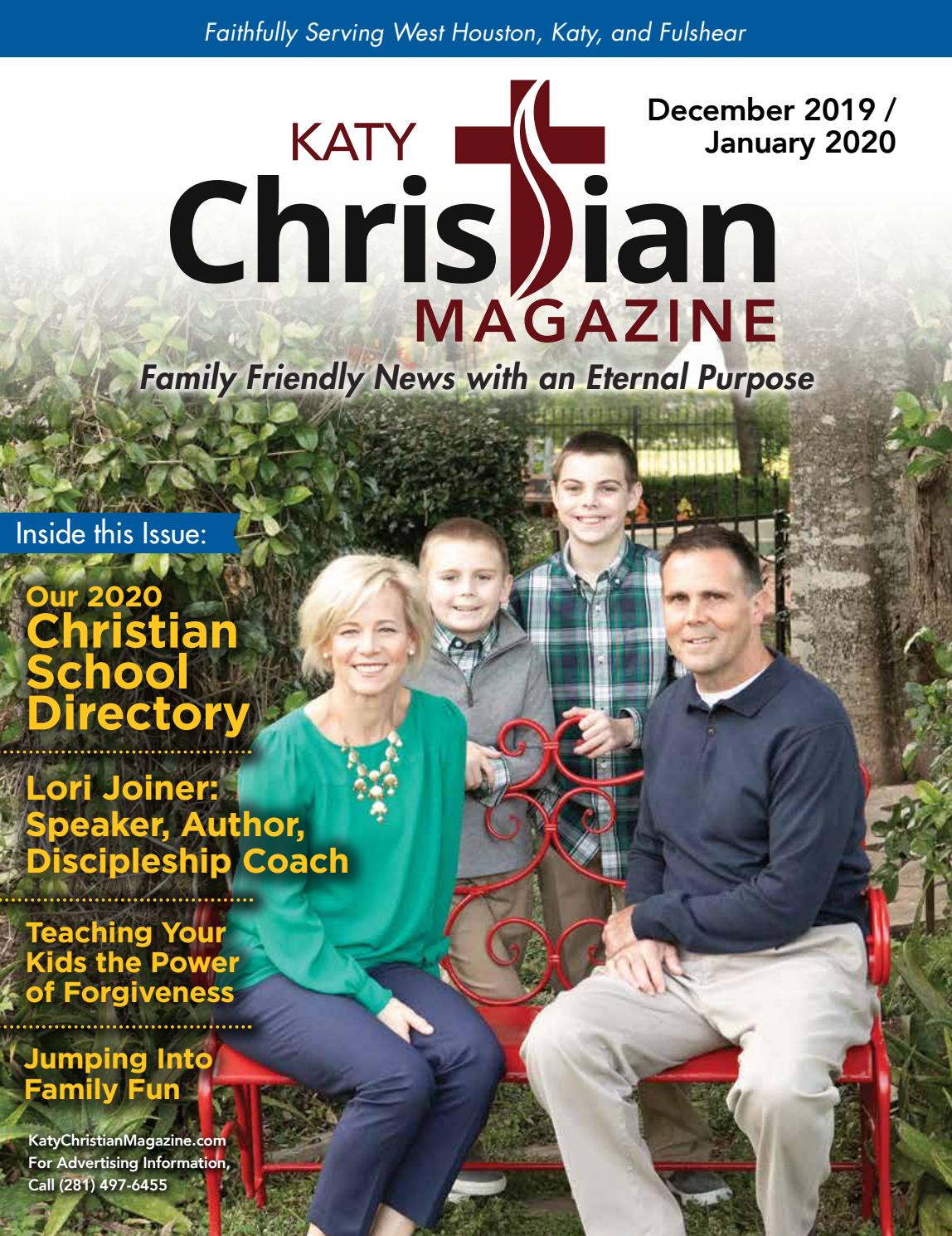 Many of you know Joe Menslage already, but for those of you who don’t I want to introduce you to an amazing man with an equally amazing charge. Joseph is the owner and founder of Katy Christian Magazine and Fort Bend Christian Magazine. If you have been anywhere in Katy, chances are good that you have come across the magazine at some point in your daily adventures.

The Katy Christian Magazine and Fort Bend Christian Magazine have been in print and serving the Katy, West Houston and surrounding areas since 2005. Joe began distributing the magazine to Sugar Land, Texas and surrounding in 2014. The Magazine is aimed at businesses and residents in Sugar Land, Missouri City, Stafford, Richmond, Rosenberg and Fort Bend County and reaches over 100,000 Christian families throughout Katy, West Houston, etc…

The magazine has reached over 4,000 Facebook and Instagram followers and boasts over 67,000 email subscribers. But what makes the magazine so amazing is not simply because it is full of timely and relevant content such as Christian news, a calendar of events, a local business directory, employment opportunities and more, but it is uniquely the product of obedience to a calling that God placed on Joe’s life so many years ago.

For many businesses, the introduction and continued challenges of the COVID-19 pandemic have placed a major strain on business owners and their staff around the globe. Sadly, it has hit close to home. What I had hoped to for those who are in my sphere influence and readership is  to introduce you to Joe and the magazine in hopes that it might tug at your heart strings enough to provoke action. There is no greater time than now to show support to those who endeavor to bring something positive to our community. To that end, I want to share something that Joseph sent me recently.

Here is how Joseph describes his journey, and his appeal:

It was the spring of 1995 when I came out with my first magazine, Houston Sports News. Several years later, I was listening to a sermon by my pastor, Wallace Henley of Encourager Church. He spoke about the necessity for churches to work together, not against one another, in reaching the community for Christ. That is when God first steered my heart toward creating a Christian magazine.

I did not act on that vision until the summer of 2005, when I began building Houston Christian Scene. The beginning of this path was filled with turmoil. We were supposed to start printing in September 2005, but the catastrophic hurricane Katrina, and later Rita, caused us to postpone printing until November 5, 2005, when our first edition hit the streets.

After a couple of issues, we changed our name to Houston Christian Magazine. In the fall of 2008, due to a personal tragedy, we once again changed the name to what it is today: Katy Christian Magazine. Then, the Lord blessed us, and we dreamt of expanding our publication to touch more lives. In the summer of 2014, we added our second magazine, Fort Bend Christian Magazine.

During my 25 plus years of publishing, we have witnessed many downturns in the economy. First, we endured the dot-com bubble burst in 2001. This was closely followed by the tragic 9/11 terrorists attacks. Both events catalyzed huge ripple effects, decimating the stock market. And yet, by God’s grace, we survived; many other magazines did not.

Then, in 2008, I lost my wife and my children lost their mother. This wounded my family and loved ones deeply. Our loss, coupled with the 2008 recession, nearly brought us to shambles. Yet again, somehow, we survived.

Since then, companies like Facebook and Google have commanded popularity and devoured up the majority of advertising revenue, while newspapers and magazines felt the brunt of it. Over these past ten years, over half of the small to mid-sized newspapers have gone out of business. Magazines have been cut in half as well. Throw in the hurricanes Ike, Harvey, and a few lesser storms… yet through all of this, we have survived.

This latest crisis, however, has taken a toll on us that we have never experienced. I am heartbroken to announce that we have lost about 2/3 of our advertisers. We are holding on with borrowed time, and it will truly take a miracle like none other to save us. We literally have about 45 days to save Katy Christian Magazine and Fort Bend Christian Magazine.

Over the years, I have made personal sacrifices publishing these magazines. I could have made much more money in other areas of sales. But the Lord urged me to use my skillset to spread His word and touch the hearts of our community. These magazines have always been a ministry to me; I truly believe that this is my calling. There are no other magazines of our kind in our communities, and now more than ever, we need a Christian voice in a world so filled with chaos.

We were not able to print a hard copy of the magazines this summer, and truth be told, we may never be able to do so again. Right now, we are focusing all of our efforts on developing and expanding our website presence, with the hope of once again printing our magazines this fall. For all of this to occur, we are pleading for as many businesses to place an ad in our online business directory as possible. For a lack of a better term, we need a miracle.

I have had many well-meaning pastors pray for our survival during these past few months. But Faith without works is dead, as are prayers without support or action.

If you have enjoyed all that we have done for our community for the past 15 years, we need your help. If not, we will soon become a memory of a better time in our community; an era when Christians had a voice.

What an amazing story and testimony from Joseph. I am reminded of his namesake, Joseph, who in Old Testament times faced many challenges and obstacles that seemed insurmountable, yet, God, in His faithfulness, provided for Joseph and made him an integral part of the survival of his community. I hope this holds true for our Joseph.

If you feel burdened to do something about it, then hopefully you will connect with Joseph Menslage today and tell him that you heard about his challenge from your friends at Adwebvertising. The rates for advertising are very affordable and will allow you to introduce your business to thousands of Christians in our area. Thank you for your consideration. Drop me a line if you would like to meet Joe in person, I am sure I could arrange something. He is a fantastic friend, and a pillar of our community.

Take a look at the Katy Christian Magazine Media Kit via the button below.

Nick and the team at Adwebvertising are the best in Houston!